Austin's original and iconic hotel features late-nineteenth-century Romanesque architecture. With its marble floors, stained-glass dome, and corridors filled with museum-quality artwork, a grand entrance into the opulent lobby transports you to a historical era. Ascend the grand staircase to the most authentic Texas bar in downtown Austin, complete with live music and happy hour every day.

The Driskill, a Romanesque-style structure completed in 1886, is Austin's oldest operating hotel and one of Texas' most well-known hotels in general. Col. Jesse Driskill, a cattleman who spent his fortune building "the finest hotel south of St. Louis," designed and built the Driskill."The Driskill remains one of Austin's premier hotels today, with lavish bridal suites, two restaurants, and a grand ballroom. Hyatt Hotels Corporation has managed Driskill since 2013. On November 25, 1969, the hotel was added to the National Register of Historic Places. 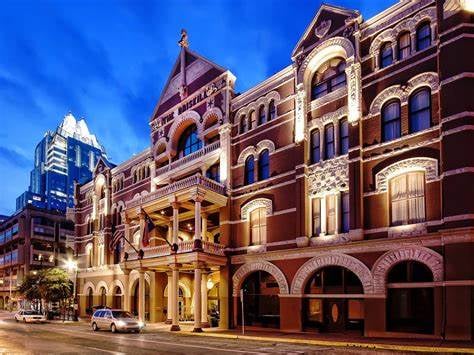 The Driskill is made up of two interconnected buildings: the original four-story Romanesque Revival structure built in 1886 and a 13-story annex built in 1930.

The original structure was built with over six million pressed bricks and white limestone accents by Austin architect Jasper N. Preston. On the southern and eastern facades of the building, there are two porticos with large Richardsonian-style arches that were said to be the largest in Texas. J.W. "Bud" Driskill faces Brazos Street, A.W. "Tobe" Driskill faces a west-side alley, and Jesse Driskill faces Sixth Street, which is surrounded by decorative carvings.

The hotel had 60 rooms when it first opened, including 12 corner rooms with attached baths, which were unusual in the region at the time. The structure was built with separate entrances for men and women. A saloon, billiard room, cigar shop, newsstand, and barbershop with baths flanked two entrances for men, one on Sixth Street and the other facing the alleyway on the west side of the building. The Brazos Street women's entrance allowed female guests to bypass the lobby's cigar smoke and rough talk and go straight. The second floor housed the main dining room and ballroom, as well as men's and women's parlors, a children's dining room, and bridal suites. An electric bell system, steam heating, and gas lighting were among the other features.

Trost & Trost, an El Paso architecture firm, designed the 13-story annex, which opened in 1930. The bungalow penthouse in the 180-room annex is only accessible from the building's roof. The bungalow has two bedrooms, each with its own bathroom, as well as a living room and a fully equipped kitchen. The bungalow was originally used as a private residence for Southern Pacific Railroad superintendents, but it was later rented to celebrities such as Jack Dempsey, Bob Hope, and President Lyndon B. Johnson. The hotel manager restored the bungalow in 1979 to use as his personal residence.

Texas Shuttle will help you plan your rides to these fun and exciting visits to The Driskill in Austin, Texas. We will pick and drop you off at your exact locations. Almost all rides are non-stop in nice cars, SUVs, or shuttles. We are available 24/7. You can also change the time or date with us without being charged. There's less hassle, and you save more money with us. The Texas Shuttle is safer, affordable, flexible, and more convenient than any other ride. Book a ride with us this weekend to experience a fun and productive weekend.

Plan your visit to these wonderful Christmas events with the Texas shuttle service. You can book Dallas to Houston shuttle service. We will pick you up and drop you off at your exact locations. Almost all rides are non-stop in nice cars, SUVs, or shuttles. We are available 24/7. You can also change the time or date with us without being charged. It even reduces the unwanted cost incurred on the fair of taxis and buses to reach home. There's less hassle, and you can save more money with us. The Texas Shuttle is safer, affordable, flexible, and more convenient than any other ride. Book a ride with us this season to experience that warm and stress-free holiday vibe.