Soon after President Johnson's election victory in 1964, discussions about establishing a presidential library for him began. In February 1965, William H. Heath, chairman of the Board of Regents at the University of Texas at Austin, proposed the construction of the library and the establishment of the Johnson School of Public Affairs on campus. On September 6, 1966, the agreement was formally signed. Unlike previous Presidential libraries, which were funded entirely by private donations, the University of Texas paid $15 million of the $18 million required to construct the complex and donated the land for the library, which was previously a low-income neighborhood acquired by the university through eminent domain.

Lady Bird Johnson, the First Lady, toured existing Presidential libraries and university campuses to consult on the library's design. Lady Bird presented President Johnson with three potential architects, one of whom was Gordon Bunshaft of Skidmore, Owings & Merrill. [2] Construction began in 1967 after the design was completed in the summer of 1966. On May 22, 1971, the Library was dedicated in the presence of Johnson and then-President Richard Nixon. 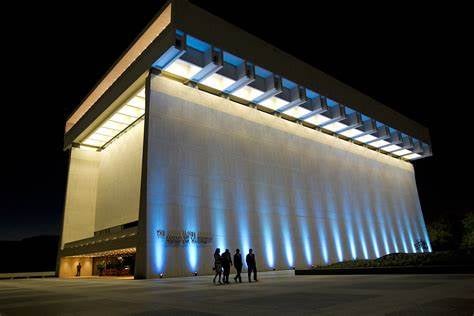 Queen Elizabeth II paid a visit to the museum in 1991 and met with President Johnson's family. Lady Bird Johnson's body was laid to rest in the Library and Museum after her death in July 2007, just as her husband's had been 34 years earlier in January 1973. The LBJ Library underwent a multimillion-dollar renovation in 2012, during which most of the exhibits were closed. The Library reopened to the public on December 22. For the first time since its inception in 1971, the Library began charging admission in 2013. The current director of the LBJ Library is Mark Atwood Lawrence.

Features Of The Library

The Lyndon Baines Johnson Library and Museum is the presidential library and museum of the 36th President of the US, Lyndon Baines Johnson. It is situated in the University of Texas at Austin and is one of fourteen presidential libraries managed by the National Archives and Records Administration (NARA). We are open daily from 9 a.m. to 5 p.m. (except for Thanksgiving, Christmas, and New Year's Day), with the last admission at 4:00 p.m. Admission ranges from $3 to $13 per person, with children 12 and under, active military, student groups, and UT Austin students, faculty, and staff with valid ID receiving free admission.

Texas Shuttle will help you plan your rides to these fun and exciting visits to the library in Austin, Texas. We will pick and drop you off at your exact locations. Almost all rides are non-stop in nice cars, SUVs, or shuttles. We are available 24/7. You can also change the time or date with us without being charged. There's less hassle, and you save more money with us. The Texas Shuttle is safer, affordable, flexible, and more convenient than any other ride. Book a ride with us this weekend to experience a fun and productive weekend.